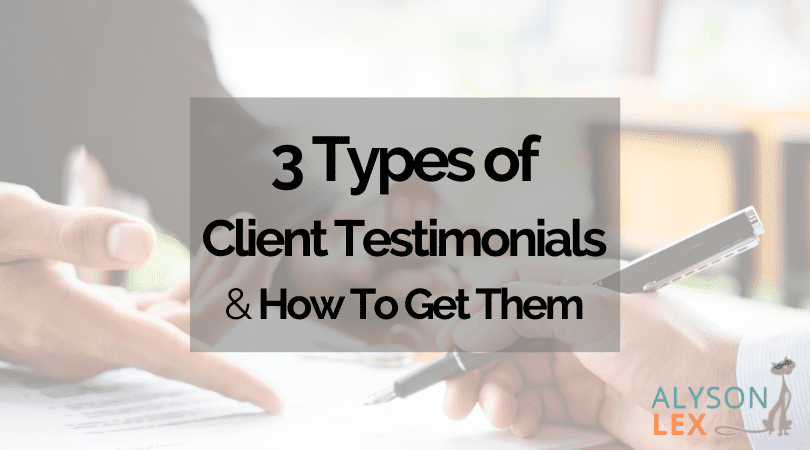 Testimonials are one of the most powerful marketing tools at your disposal… and the reason is pretty simple:

Your customer has been screwed. A LOT. And when you can show them REAL words from REAL people who can show why you’re awesome…. It helps overcome that “but will I get taken for a ride?” objection.

There’s a saying that what other people say about you is stronger than what you can say about yourself – and this goes double for testimonials.

But if you have 651 people all saying they’ve lost 10 pounds in 10 days… I’m more inclined to believe you’re the real deal.

Testimonials also show that you’ve, you know, DONE this before. You’re not a total newbie. You’re not just fresh off the street pretending to be an expert. If I see testimonials from lots of people all getting the kind of results I want… again, I’m more inclined to believe you’re the real deal.

There are basically three types of testimonials:

That’s a result based testimonial. I have one like it. It’s by far one of my favorites.

What makes result based testimonials so powerful is they are specific. They focus on the exact result you helped the client achieve.

That said, these types of testimonials work best when pitching similar projects.

For instance, my testimonial is from a previous client named Nick. I did a copy review for one of his sales pages.

He gave me an awesome video testimonial. To paraphrase his words, “Hey, I had Alyson do this. I thought this campaign had run its course. But because of her changes, I made an additional $25,000 to $30,000 in my business.”

I wouldn’t necessarily use Nick’s testimonial to promote myself as a speaker… but I’d use the HECK out of it if I was trying to sell copy reviews.

Results based testimonials are very specific about an outcome that your client received. They typically have a number in them.

“I lost X number of pounds. I met the man of my dreams in X number of days. I made a certain amount of money,” are all examples of what result based testimonials sound like.

They don’t have to have a number in them if what you do is not quantifiable. If you just generally help people with confidence, you can still have a results based testimonial, even if they don’t give you a number.

The important thing is to focus on the before and after state of the result.

For instance, Nick thought he’d done all that was humanly possible for his campaign. That’s the before state. The after state is the additional $25,000 to $30,000 in income he made after I reviewed his copy.

Then you have testimonials that overcome specific objections. And while they can be the same as results-based testimonials… this is oftentimes where you talk about a NON-quantifiable benefit to what you do.

Testimonials that overcome objections can go something like, “I was unsure about hiring a copywriter. I thought I could do it all myself. But after working with Alyson, I totally understand the power of having a pro on your team.”

These testimonials are incredibly powerful. They speak directly to the state that your existing audience might already be in. They talk about the EMOTIONAL part of hiring you, not just the end result.

I like to use these RIGHT NEXT to where I talk about those objections.

For instance, I have a testimonial from an agency owner who I’ve worked with a lot. His testimonial goes something like: “You know, you’re not like other copywriters. You do what you say. You show up when you say you’re going to. I know I can count on you.”

That’s an objection overcomer, and I’d use it near copy where I talk about how they’ve probably gotten burned by other writers who ghost and aren’t reliable.

The third type of testimonial you’re going to have is your raving fan testimonial.

I have one of these. Somebody once gave me a video simply saying, “I love Alyson, I buy everything she sells, I know that it’s gonna be worth it. She’s just awesome.”

These testimonials are great to have and share. They’re good for beefing up your testimonials. Although, they are not on their own the most effective testimonial because they tend to be too generic.

I like to use these in what I call the “testimonial wall.” This is where you have a page of JUST testimonials that you use to overwhelm your prospect with social proof – look how many people love me!

Raving fan testimonials are the LAST ones that I use – and they fill in space really well. Don’t rely on them as your ONLY ones, though.

How to Show Off Your Testimonials

You can get a result, an objection overcomer and a raving fan testimonial all rolled up in one. It’s up to you to use them strategically.

If it’s a video, you can clip and separate parts that correspond to each type of testimonial. For handwritten testimonials, you can highlight or cut out certain parts.

Always grab the chance to get a video testimonial if it ever presents itself. There are a couple reasons for this –

If I get an email that says something like “Hey, this was awesome. Thank you so much! I got an 83% optin rate on this!”…

I screenshot that bad boy and add it to my testimonial area or social media pages. The screenshot, which contains the client’s exact words, is as good as a video.

How to get client testimonials

“Okay, okay. Testimonials are important, I get it. So how do I go about you know, GETTING them?”

There’s one easy way to get a testimonial. Ask for one. If somebody is really a big fan of your work, they will give it to you.

You can also screenshot emails, comments, Facebook messages, and so on. Asking for permission before sharing won’t do you any harm.

The third way is an interview. You can do this on video, of course… but it IS possible to get the words in written form as well.

I also ask them if it’s okay for me to use their feedback in my marketing materials.

If you’re at an event where you’re speaking, grab your phone, and record people talking. Ask them what they thought of what you said, what they learned, how it changed their point of view, and so on.

Get your person to hop on a quick zoom call with you and record it.

Tip: You can edit yourself out of the video! Ask your person to answer in complete sentences so you can edit the video and have it still make sense.

There are a ton of ways to gather testimonials. I want you to pay attention to what testimonials you have, how you might be able to use them to further your message and your sales.

Your people want to work with someone they know is the real deal. They NEED that social proof to trust you… because like I’ve already said: your buyer has been burned before. Show them you won’t burn them.

And now I’ll practice what I preach: liked this? Leave me a comment down below and tell me what you learned and how you feel after reading this article. Who knows – maybe I’ll use you as a testimonial. 🙂

This website uses cookies to improve your experience while you navigate through the website. Out of these cookies, the cookies that are categorized as necessary are stored on your browser as they are essential for the working of basic functionalities of the website. We also use third-party cookies that help us analyze and understand how you use this website. These cookies will be stored in your browser only with your consent. You also have the option to opt-out of these cookies. But opting out of some of these cookies may have an effect on your browsing experience.
Necessary Always Enabled
Necessary cookies are absolutely essential for the website to function properly. This category only includes cookies that ensures basic functionalities and security features of the website. These cookies do not store any personal information.
Non-necessary
Any cookies that may not be particularly necessary for the website to function and is used specifically to collect user personal data via analytics, ads, other embedded contents are termed as non-necessary cookies. It is mandatory to procure user consent prior to running these cookies on your website.
SAVE & ACCEPT